I think I'm one of those couponers who peaked early and then crashed and burned.
People complain that they don't coupon because it's so much work and so much to keep up with and I think that they might be right. I've had a huge stack of inserts to clip and file for a while now but I haven't managed to get around to it. It's partly because I work a regular job, partly because I have another new big project and partly because couponing is kinda lonely.

But then I look at the depth of our debt and I'm grateful that I'm at least doing it sometimes. We really have drastically reduced our grocery bill. For one thing, you don't realize how much stuff actually costs until you find how cheap you can get it. I swear I will never pay full price for cereal again. No way in heck. So thats why the updates have disappeared. Work has been busy. My other project has been busy, and I've just not had as much time as I would like to wax lyrical about the virtues of personal finance and saving money. Although, I am looking into RelayRide or some other service. Basically the idea is that when you aren't using your car, you rent it out by the hour. I'm trying to find someone who has been involved in it before so that I can get a better inside opinion. Know anyone?

But for now, I have sorting and clipping and writing to do.
Posted by Redd at 10:47 AM No comments: Links to this post 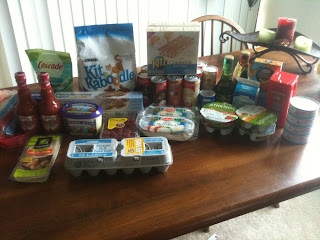 Albertsons have the magical little coupons available that double manufacturer coupons again. I'm very lucky that my store lets me use three per transaction so that I don't have to check out so many times.

This shopping trip was a really great one. They had Mozzarella cheese on BOGO as well as Tillamook Cheddar on sale for $6.99 for two pounds. I stocked up on those, which was $14 of the final bill.