Nail Polish is one of those little luxuries that I pretty much never buy. I rarely wear it, and often can't justify it. But, there was a great deal on Nail Polish at Walgreens and I have a big big work party coming up that I want to have nice looking toes for.

I even had a Walgreens giftcard from some register rewards, so I used that and spent nothing out of pocket. That was a pretty neat little trip.
Posted by Redd at 6:16 PM No comments: Links to this post

Target Shopping from May 23rd 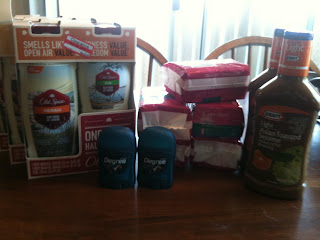 I like Target and I enjoy shopping there. You may ask why I go shopping at so many different stores so often. It's partly because I really really enjoy going out and shopping with coupons. Some people have a latte habit.... I have a coupon habit. At least this way I spend the same amount but get things I can use and keep that last longer than half an hour. I am lucky in that I have all of these stores very near me. I'll often stop in on the way to work (I work Thursday-Monday). Target is a good store to just wander around with my binder and see what I find.

Here's how I did.

This was an awesome find. These bonus packs were on a clearance end cap. They are packs of one and a half bottles of my Stunt Guys favorite body wash.

These are mostly all going to be donated. I'm working on building a donation box so that I can pass things along to a local womens shelter.

Other people have found these for $1.69 each which makes it a much better deal, but I deeply love this salad dressing so I paid a little more for it because I was at the store already. It actually accounts for the bulk of the final bill.

I also received $0.05 off for bringing my own reusable bag.

So I've been trying to shop at Walgreens for the last few weeks to varying degrees of success. I've had several problems and today a checkout that should have taken 10 minutes ended up being 45 minutes in the store. Part of it was my fault and part of it was the registers and cashiers.

I've had the hardest time finding items in stock. I have numerous rainchecks, and I've actually never had a Register Reward print out accurately. Now today, it looks like I did in fact grab the wrong product off the shelf. By the time we figured it all out, it looks like I got four bottles of very inexpensive shampoo that shouldn't have been as cheap as they are. I think a lot of it is me getting used to their system, but it's very stressful and I get the feeling the cashiers there all already hate me.

I think I'm going to give up on getting rainchecks for a while and try and stick to the sales that are current. I'm also going to be super extra special careful about what I purchase and hopefully it'll all come together okay.

I like to think that Walgreen's would be worth it, but I really could use a good shopping trip to make me feel that way.
Posted by Redd at 4:08 PM 2 comments: Links to this post

Grocery Shopping for May 18th 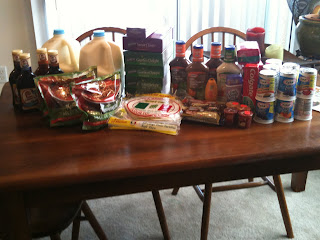 I always go to the grocery stores on Wednesdays. It's the first day of the sales, and it works really well in my schedule. I usually supplement my coupon grocery shopping with produce shopping as well. You can't really live off pasta and toothpaste alone. It is certainly nice to have more variety of food items as we continue to build our stockpile.
I was really happy with how I did today. The numbers are a little skewed because I bought milk, which is hard to find on sale, and I also bought veggie crumbles, which are a pricier item that I don't buy very frequently. Those two things alone counted for $12.50 of my spending. Here's how I did.

Lady Speed Stick Deoderant
I have to go back to the store for this one because in looking at the receipt, the sale price didn't ring up. Updating that later.
It should have been $1.47 with a $0.50 coupon to make it $0.97, but it looks like it cost me $2.69. Customer service, here I come.

So all in all a good day. I did go over budget... I had hoped to keep the whole trip under $25. Hopefully I'll do even better next time!
Posted by Redd at 8:35 AM No comments: Links to this post

Couponing Tricks Everyone Should Know

In my first month working on couponing, I've learned a lot of things that I never realized about how coupons can be used to save money. Here are some basic tricks that everyone should know when you're using coupons.

Buy One Get One Free Sales:

If an item is buy one get one free, you can still use a coupon for each item. So if you have a $1 off coupon, you can use two to get $2 off the bought item.

On most items, you can use one store coupon and one manufacturers coupon, potentially stacking them.

Check to see if your store allows you to double coupons. Some stores will double or triple up to the value of a dollar.

Keep an eye out for items that you don't necessarily need, but that you have coupons for over the value of a product. This happens most commonly when medicinal items go on sale. The overage can be used to cover other portions of your bill.
Posted by Redd at 6:42 PM No comments: Links to this post

Walmart Shopping from May 15th 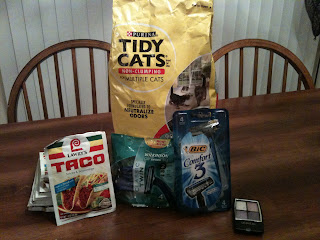 I had a fairly decent shopping trip at Walmart. My intention was to nab a few free or incredibly inexpensive items as I continue to build my stockpile. I've had mixed results at Walmart and my new rule is that I don't go unless I have at least 5 different things to pick up... mostly because I don't like to be disappointed. Here is how I did.

This is on sale at Walgreens for B1G1 50% off, but Walmart has a much better deal.

I wish I had more of those $1.10 coupons but I only had one left. This was a stockpile item. I hit my max of 10 and don't need to buy any more for a while.

We don't use Taco seasoning much at all, but now I have a good supply for those times when we do decide to use it.

So, I'd previously mentioned that I'm back in debt again. It makes me sad when I look at how far I came before and where I am now. Granted, I'm making more money than I ever have before. I have great benefits. I absorbed my Stunt Guys salary with some extra. I should be in great shape. So why am I not?

Well, there were many many contributing factors. One of the biggest ones though was a 2002 Ford Escort affectionally named " I Hate You You Stupid Car".

When I moved to Las Vegas in January, I took a look at my beloved 1996 Toyota Corolla and I realized that it wouldn't make it to Nevada without falling to pieces. I thought about what to do and decided that what would be best would be to leave it in Atlanta and buy a new (to me) car once I got to Vegas. I figured that I should be okay to find a car quickly.

I got to Vegas in the middle of the night and quickly realized that I would be spending a fortune if I had to apartment hunt with taxis. As I was losing relocation expenses every night I spent in a hotel, I decided to hurry along and buy a car to make my life easier. I found a dealership with a $2900 (eek!) car that looked promising, and took a taxi there in the morning, knowing I would be driving out of there in a car.

This was my first mistake. I was in a hurry and I left myself with no room for error. When they didn't have the car I saw online in stock anymore and I asked what the next cheapest one would be, the only option I was given was a car that would be $5,000 including taxes. I shouldn't have done it, but I decided maybe that would work. It was a much newer car, a 2002, but I wasn't too worried because I figured I would drive it to death and it would be fine. I asked to finance it.

Then, things went very very wrong and this is where I should have walked away but I didn't.

They wouldn't finance a car less than $8,000. Not wanting to spend that much, I decided to pay cash for the car. That would save me money in insurance too I thought. I also bought a warranty because I wanted to make sure the car wouldn't break down. Because I didn't really have the cash, I called my bank, extended my credit limit and charged the car.

This was the dumbest decision I think I've made in a long long time. I shouldn't have done that. I regret it. It was the beginning of a big pile of trouble. Extending my credit limit mean that my minimum payments on the car would now be much higher. I was also a lot closer in the realm of maxing out that card than I had been.

Bad choice. I should have found a cheaper car. I should have taken more time, but I was in a hurry. So I messed it up. Now I'm paying for it. That car also ended up needing $600 of work. I haven't really paid off any of it yet.

So my advice is don't rush, take your time, and listen to yourself when you realize you are about to make a mistake. I'm going to be literally paying for this one for a long time.
Posted by Redd at 2:30 PM No comments: Links to this post

I discovered the concept of Extreme Couponing a little while ago. I started working on gathering coupons in Mid April and since then I've been making great strides in saving money at the grocery store. It's changed the way that I shop probably forever. Here are a few things I've pulled off so far. 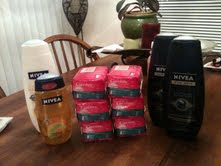 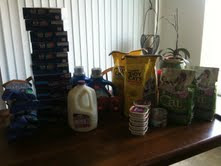 As I work on this, I'll be sure to update my progress here. My goal is to get my grocery bill down as low as possible, while we are a one income family every little will help. I'd also like to get up to a 75% saving on my groceries for the month. I started in mid april and in April I saved 24% on my groceries. So far in May I'm up to an average saving of 55%.
I'm working on building up a stockpile of things that we use a lot of and things that are easily stored... like cereal and body wash.

I don't want to be a crazy hoarder person, so I'll be trying to not get too carried away. But I have to say, it is pretty fun. It's like a hobby and a video game.
Posted by Redd at 12:53 PM No comments: Links to this post